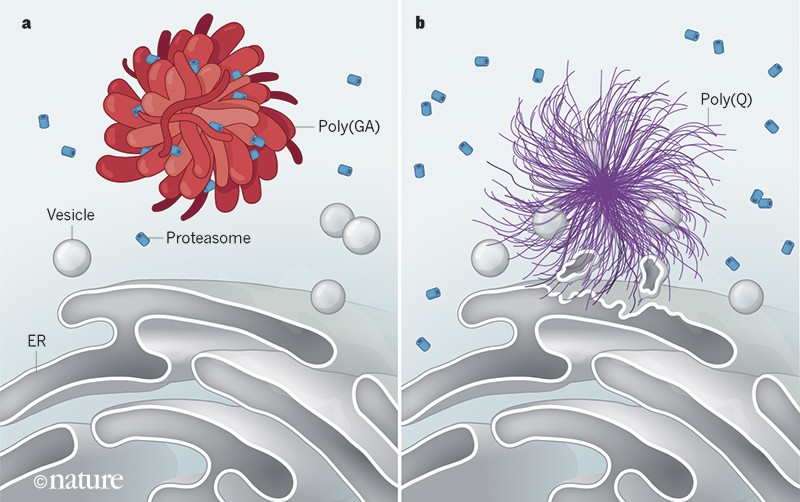 Neurodegenerative diseases are often associated with genetic mutations that cause repetition of short sequences of nucleotides. In the disorders amyotrophic lateral sclerosis (ALS, also known as motor neuron disease) and frontotemporal dementia, such an expansion in a non-protein-coding region of the C9orf72 gene1,2, leads to aberrant translation products that contain repetitive stretches of glycine and alanine amino-acid residues. These ‘poly(GA)’ products form aggregates in neurons, and have been implicated in the disruption of a key cellular process in which complexes called proteasomes degrade proteins3,4. However, the biochemical basis for this disruption, and how it might promote disease, is poorly understood. Writing in Cell, Guo et al.5 precisely map the organizational and structural features of poly(GA) aggregates and associated macromolecular complexes in neurons using a technique called 3D cryo-electron tomography (cryo-ET), to provide direct visualization of how proteasomes are disrupted by poly(GA) proteins.

Cryo-ET in 3D uses electron microscopy to view very thin, frozen but hydrated sections of a cell from various angles. The resulting images are combined to produce a 3D image called a tomogram. Guo et al. used 3D cryo-ET to visualize neurons that had been genetically engineered to express a poly(GA) tract that contained either 175 or 73 repeats. The tracts were fused with a green fluorescent protein that enabled their precise position to be determined using correlative light microscopy. The engineered protein mimics poly(GA) tracts that are produced fromC9orf72 expansion, which take a long time to form in vivo. The authors found that poly(GA) proteins form highly clustered and often bifurcated twisted ribbon structures that are of relatively uniform thickness, but of variable length and width, similar to poly(GA) structures previously observed by conventional electron microscopy in vitro6.

The value of the authors’ work lies not only in their observation of the structure of poly(GA) aggregates in detail in cells, but in their comparison of poly(GA) with aggregates formed through a different genetic expansion — a glutamine repeat (poly(Q)) tract, which causes the neurodegenerative disorder Huntington’s disease, and which the same group analysed by 3D cryo-ET last year7. This comparison revealed structural differences that could explain dissimilarities in pathogenic mechanisms between the conditions.