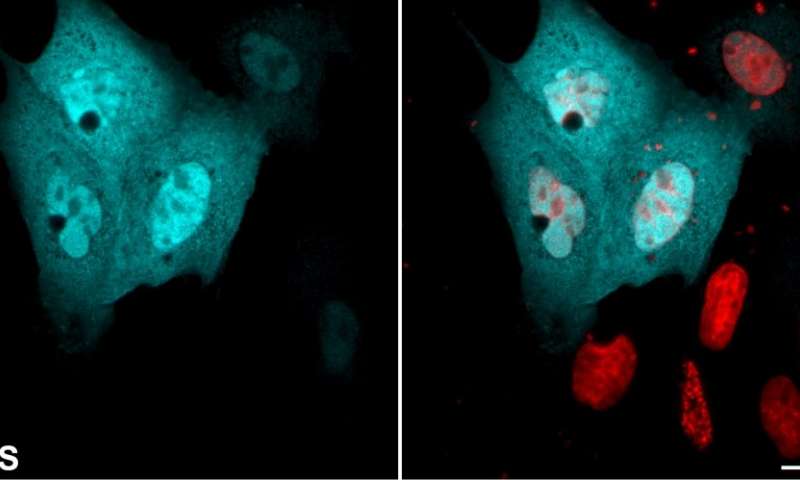 In 2013, the Nobel Prize in Physiology or Medicine was awarded to three scientists for their contributions to uncovering the mechanisms governing vesicle transport in cells. Their explanations provided both a conceptual and a mechanistic understanding of basic processes at the most fundamental level.

At the heart of this Nobel Prize-winning intracellular process lies SNARE (soluble N-ethylmaleimide-sensitive factor attachment protein receptors), a superfamily of 60 proteins in mammalian cells that transport lipids and membrane proteins across the cells by facilitating the fusion of vesicles to their target membranes.

Biologists at UC Santa Barbara have now discovered a surprising, additional function for syntaxin 3S, a soluble form of a SNARE protein. The researchers found a new signaling pathway widely used by human and other mammalian cells. The team’s results appear in the Journal of Biological Chemistry.

“What we found was very unorthodox and hadn’t been known before,” explained corresponding author Thomas Weimbs, a professor in UCSB’s Department of Molecular, Cellular, and Developmental Biology. “Syntaxin 3S binds to transcription factors—proteins involved in converting DNA into RNA—and regulates the expression of the genes controlled by those factors. In fact, our initial results suggest that these genes play a role in cancer progression, but that remains to be definitively proved.”

In a scientific first, the UCSB researchers showed that besides the well-established role of syntaxin 3 in membrane fusion, its novel soluble version is transported to the cell’s nucleus and carries out a completely different function. In nature, many proteins have more than one function—a phenomenon known as protein moonlighting.

That syntaxins—and SNARE proteins in general—are capable of moonlighting was unknown until now. Given that syntaxins are present in all cells and responsible for a large number of essential cell functions, the discovery that these proteins can carry out additional functions suggests that much more is yet to be discovered.

“Finding that syntaxin 3S functions as a nuclear regulator is the beginning of a story that opens up a new field of research,” Weimbs said. “It’s like a field of snow with no footsteps on it because nobody has done research on this, so we can pick and choose the most exciting directions to follow.”

Weimbs and his colleagues identified similar nuclear-targeted soluble forms of other syntaxins, which indicates that this signaling pathway is a conserved, novel function common among these membrane-trafficking proteins.

In the future, the UCSB biologists would like to delineate how far-reaching the functions of these new soluble syntaxin versions are. Are there other unidentified forms of syntaxin that bind to similar nuclear import factors? Do they bind to different or similar transcription factors? Do they regulate different genes?