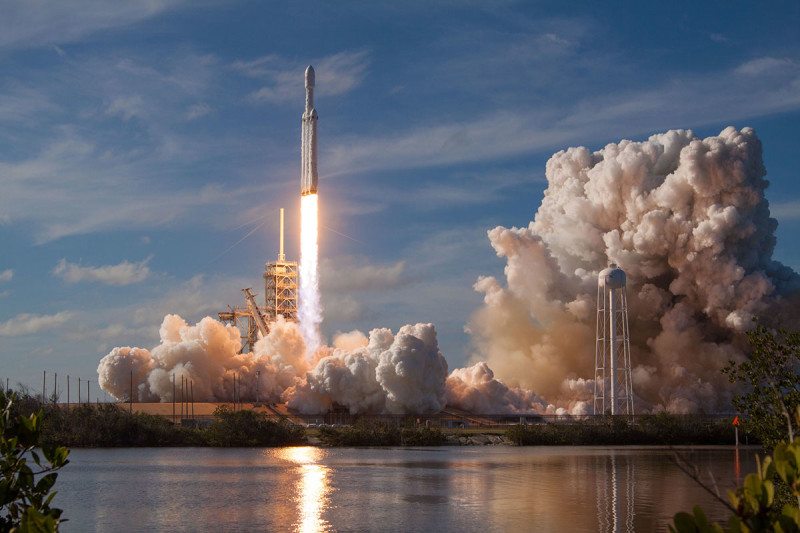 Whoomph. Standing nearly 5 kilometres from SpaceX’s Falcon Heavy rocket as it took off for the first time, I felt like my lungs were exposed to the open air, the rushing sound and steam from the rocket’s engines squeezing my heart and making it beat off-kilter. People describe rocket engines as thunderous; despite the warm day and nearly cloudless sky, it was more like being inside the thundercloud.

I was at NASA’s Kennedy Space Center and we’d been waiting through delay after delay all afternoon. There were powerful winds high in the atmosphere that could ruin the launch, and it seemed like they’d never die down. High winds are dangerous for rockets, even one as burly as Falcon Heavy.

It is 70 metres tall. Its first stage, the boosters that power it into space, is basically three Falcon 9 rockets strapped together. In all, they have 27 engines – more than any other working rocket – and they can create up to 5 million pounds of thrust at liftoff.

It’s capable of putting 63,800 kilograms into low Earth orbit – that’s more than a seventh the mass of the entire International Space Station – or bringing 16,800 kilograms to Mars. Put simply, it’s the biggest and most powerful rocket on the market. The only other launch vehicle that could lift as much as Falcon Heavy was the Saturn V, which delivered astronauts to the moon but hasn’t been in use since 1973.

I had travelled to Florida to see my first rocket launch in person. But as the afternoon dragged on, I wondered if the flight would be scrubbed. I took a walk to ease the tension and returned to the press area to find that the fueling had begun. It seemed like the Falcon was going to fly.

I walked across a grassy ridge to stake out a spot near the Turning Basin to watch the launch. Across the water sat Falcon Heavy, looking like a toy model from so far away.

I kept an eye on the massive countdown clock in front of me. When the exhaust from the engines began to pour from the launch pad, the crowd hushed in anticipation. Falcon Heavy took to the air, flame shooting from its boosters, not looking like a toy anymore.